Return to My birds

The male is dark brown and the female chestnut brown. 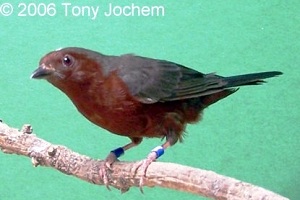 Food: Nigritas are the only members of the family Estrildidae that eat no seeds, or hardly any. They feed on all kinds of insects, including caterpillars, small insects, and eggs of the tree frog, which they find in the calyx of bromelias. Furthermore, they may eat specific fruits, often eating palm fruits, which are rich in vegetal oils and carotene.

A solitary bird. Only when searching for food will it, though not very often, associate with others of its own species. Sometimes also with other negro-finches. Not until the breeding season approaches do they form pairs. When they are grown up, the young have to look for a territory of their own. The author once had three couples  in large breeding cages, male and female usualy being separated from each other by a plastic partition. It is evident that the female determinates the territory, for outside the breeding period the males were chased away in all cases. 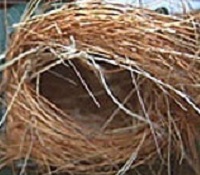 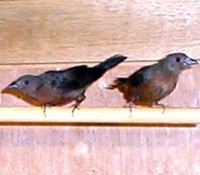 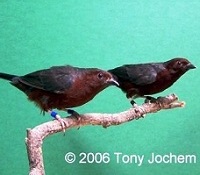