Estrildid finches in the picture 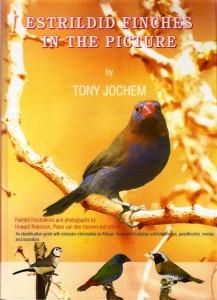 Estrildid Finches in the picture A reference with a description of all estrildid finches.

You may also like the book Breeding Estrildid Finches.
If you order both books at the same time, you only pay shipping costs for the most expensive book.

This book was written to serve as a source of information, a reference work for all who wish to become more knowledgeable about that wonderful branch of the family of finches known as Estrildid Finches. It does not pretend to be a scientific treatise, but aims to be a useful aid for aviculturists who keep and breed their birds with the goal of preserving the species. For detailed specific information on how to keep these birds and achieve breeding success, the reader is referred to Breeding Estrildid Finches, also written by the present author. To get a realistic feeling of the habitats, I visited Africa.

Structure of the book The book is organised into one introductory chapter, followed by nineteen topical chapters, each describing one or more genera. Chapter 1 consists of two main parts. At first there are some general notes on birds and bird keeping (with special reference to estrildid finches), plus a discussion of the anatomy, nomenclature and taxonomy of birds in general. Then a description followes of the main geographical elements, vegetation types and climate characteristics of the continents where estrildid finches are found in the wild. 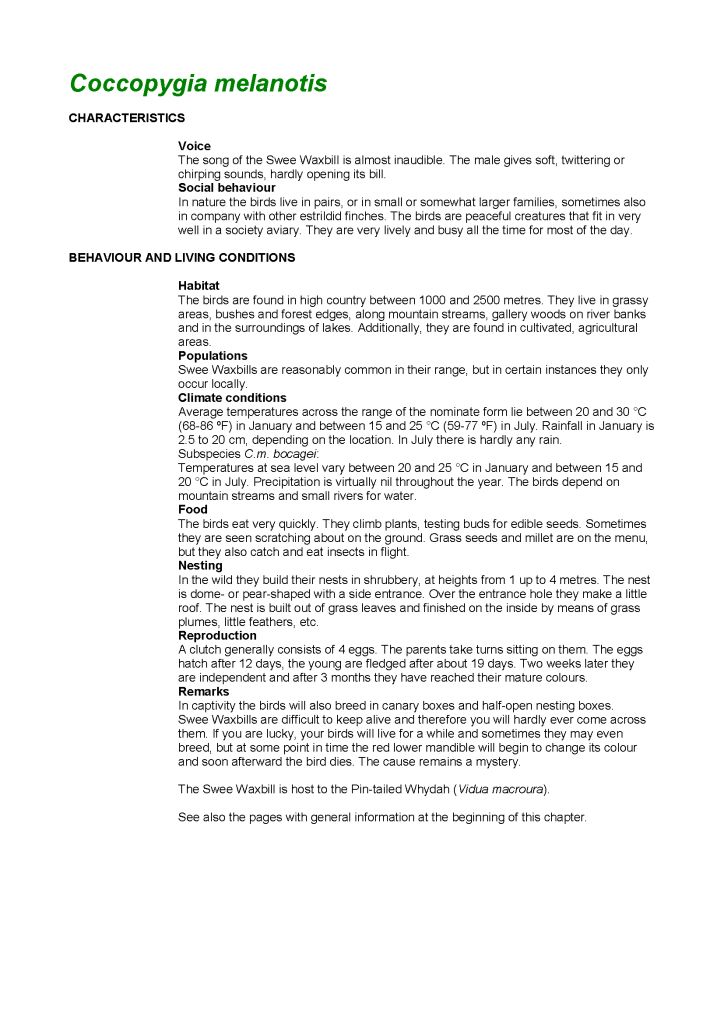 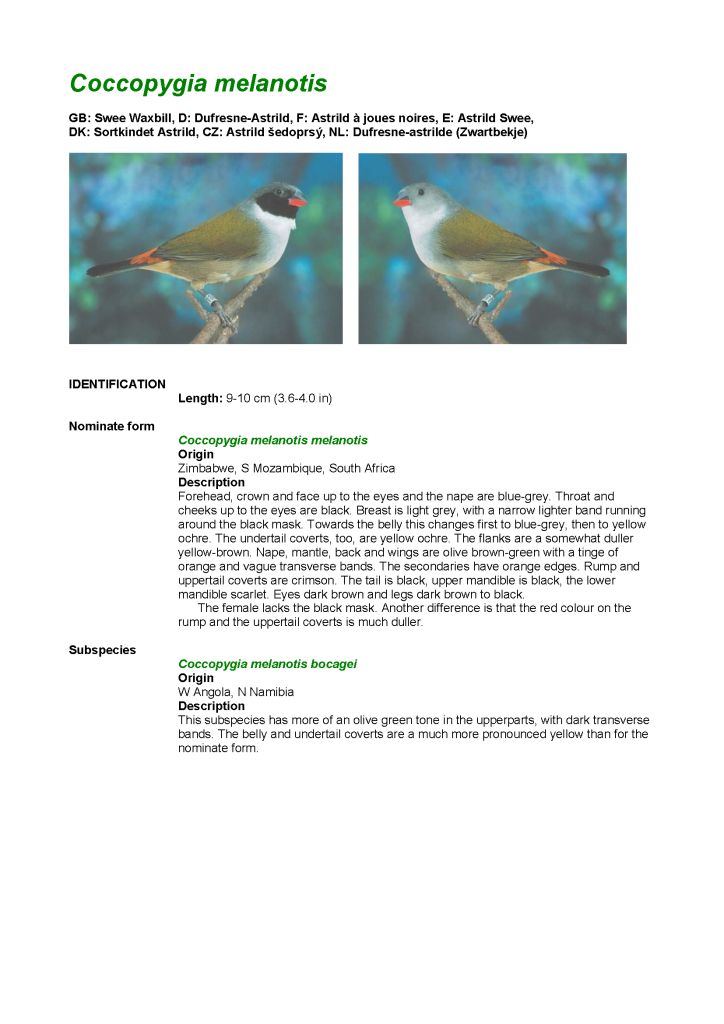 Pictures with description of the species, subspecies and origin

After this introductory chapter comes the main body of the book. In each of Chapters 2 – 20, one or more genera are grouped together according to what aviculturists consider to be the most logical system. The genera comprised in a particular group may or may not be closely related. It should be noted that in much of the English-speaking world the groups in Chapters 16 – 19 (manikins and munias) are treated as one single group.

Scientific nomenclature Generally speaking, the scientific nomenclature of bird species follows that of the 2003 edition of The Howard and Moore Complete Checklist of the Birds of the World, Edited by E.C. Dickinson, up to and including part 8 of the corresponding Corrections, published  October 2008 (actual on 1th January 2013) and The Birds of Africa, Vol. VII, edition 2004 by Hilary Fry, Stuart Keith, Emil Urban and Martin Woodcock.

Re-classifications In view of the rapid developments in DNA research, several birds may be expected in the near future to be assigned to other genera than those to which they belong according to the present view. Such re-classifications would then be reflected in changes in scientific nomenclature. It should be noted that popular names may be subject to change as well. The bird descriptions in this book include common names in seven languages (English, German, French, Spanish, Danish, Czech and Dutch), according to the authoritative Avibase Internet website as per January 2008.

Resources The emphasis is on the patterns of life of Estrildid Finches (Estrildidae) in their original habitat, together with photographic illustrations and particulars on the various species and subspecies. The descriptions were taken from English, German and Dutch literature and from various Internet sites. These were supplemented by the author’s own observations and photographs, made during his travels through several African countries, covering thousands of kilometres of Savannah. The photographs show birds in the wild as well as typical habitats. Among the many others who contributed facts and illustrations, I like to thank in particular Mike Fidler and David Myers from Australia, Howard Robinson from the UK, Pieter van den Hooven, Henk van den Berg, Wim Koster and Betty van Hof-Wever from the Netherlands for their kind co-operation.

I also wish to express my gratitude to my translator Jaap van Braam Houckgeest for his careful work and for the many useful suggestions he made to improve the text, and to Howard Robinson who was so kind as to review the entire contents of the book.

Despite all efforts, it was not possible to obtain clear and original photographs in each individual case. Sometimes the only solution was to reproduce a painted image, while in other cases the available photographs had to be edited. Every effort has been made to achieve as natural a representation as possible, based on the available descriptions.

Comments by bird breeders who have ordered the book before you:

I received the books yesterday. To say I am thrilled is an understatement. The books greatly exceeded my expectations. Surely these books are the paradigm of finch literature. It makes me want a pair of each. Thanks.  (October 9, 2019 – Clint H. – USA)

“Books arrived here in perfect condition. I never have seen such wonderful publications in the form of books, before. I have no words to explain how much I love your books about this wonderful finches. Your knowledge of Estrildid Finches of the whole world is enormous. I am completely stunned to see the most, least known and rare species and subspecies of these family. I like booth of your books: Estrildid Finches in the Picture is a bible on the subject. In fact, the most comprehensive work of these finches in the world!

Breeding Estrildid Finches will be no dubt a valuable source for a lover of these beautiful finches, like me. I like your suggestions and remarks  on every aspect of breeding different species along witg your guide of setting up breeding cages and other important categories of a complete birdhouse.”

“I just wanted to thank you for the two books and DVD. I am constantly referring to them as a big part of part of my educational experience and have already incorporated several suggestions. I really like your thoughts on keeping these little guys and I know that what I am learning will help me keep them happy and healthy and thriving in their artificial home. Thank you again, it is very important to me to do right by them!”
(August 6, 2010 – Andrea D. – USA)

“Really an encyclopedia. All Estrildid finches are pictured  and described. More complete than Finches and Sparrows by Clement, Harris, Davis and Prachtfinken by Horst Bielfeld. Even the last discovered estrildids are present. Beautiful book, logical layout with lots of pictures from birds and their habitat.”

Just received the books today, they are superb, excellent detailed works! Thank you so much.
(July 19, 2019 – Richard C. – Canada)

“The only book I know, in which all Estrildid finches are pictured and described. Waw. There are species  pictured  of which I did not know even the existence.”

“The first book with a structured layout. All information is systematically described.”

“The books are great, new informations  for me and two excellent books!! Thank you !!!”

“Books arrived here in perfect condition. I have never seen such a wonderful publications in the form of books before. I have no words to explain how much i loved your books on these wonderful finches. Your knowledge on Estrildid finches of the whole world is enormous ! I am completely stunned to see the most least known and rare varieties and subspecies of Estrildid finches.”
(April 1, 2016 – Khaan W. – Pakistan)

“Book arrived in mint condition and I am very pleased with it. Will pass the word around Queensland Finch society for you.” (August 27, 2014 – David E. – Australia)

“My compliments. Beautiful edition. Will certainly enjoy it in the coming months and years.”
(November 17, 2009 – Kees H. – New Sealand}

“More complete than Finches and Sparrows by Clement Harris Davis and Prachtfinken by Horst Bielfeld.”
(August 12, 2007 – Bettie W. – The Netherlands)

Nobody has given negative comments………..